No. No I didn't. But I can see how that is such an easy mistake for people to make.

At any rate...
We had just finished up another Chrommie encounter (flawlessly, I like it when that happens), and we stumbled into the upper level of BWL.

You can imagine my relief to find an old friend sitting there! 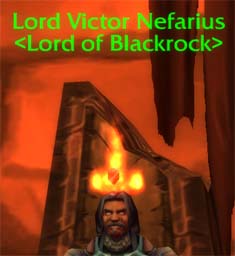 Lord Victor! What a champ!

I mean, hell, I was as surprised as you would be now to find out he was actually the tyrannical, 100 foot long, dragon ruler of Blackwing Lair.
I just assumed the levitating fiery crown was, you know, early Christmas preparation or something.

So... first attempt at Nef was going smoothly until phase 2, when our idiot maintank just outright died... apparently he'd somehow unequipped his Onyxia Cloak... you know, the one that is absolutely essential for this encounter, especially for the main tank. Pft, if you ever see him on the LFG channel, /ignore Cartollomew, what a rubbish tank.

We somehow managed to overcome the remarkable ineptitude of our MT and downed Nef in 3 attempts (counting the first attempt, which was doomed from the start, and kinda funny in retrospect).

He did not drop druid or warlock loot, proving he is either hideously unfashionable amongst bosses, or just a trendsetter (we're hoping for the latter. Well, the druids aren't).

Just a few things before I wrap up: 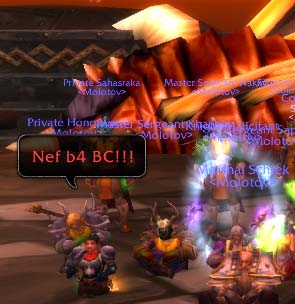 What, question marks? Like you don't believe it will happen?
Well, at least you can't accuse us of aiming low.

We shout a lot of things during screenshots. This is because the person taking the screenshots is clearly an imbecile and it is simply unthinkable that whatever rubbish you shout out will be somehow excluded from the front page.

Sometimes it's not rubbish...

Modest? Oblivious?
We may never know.

Why waste time? Farming NR gear began last week, we'll need to do a poll on who has Naxx attunement too...

saved your best for our finest hour.

now if only they had uni classes at 2am.....seems to be when your mind is most focused!

Hey... there is no gloating post on the WOW forums... I think we earned one!

Dang this sucks to be on the road.
Did get some crappy caster NR boots from Mara today tho...gonna get that NR right up there!

Can't wait to get back.
Tamerlane and Bayazid
Top

I can still remember how satisfying that kill was, good times

Edit: Moved it here, out of the mess hall to keep some order
Top
Post Reply
5 posts • Page 1 of 1